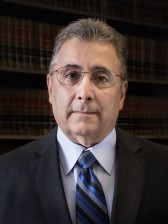 In September of 2013, Judge Haddad returned from the bench to accept an appointment as Senior Mediator and Arbitrator with ADR Systems of America. In addition to his mediation and arbitration duties, in September of 2014, he rejoined his old law firm as “Of Counsel” to Schlack & McGinnity, P.C. (formerly Haddad, Schlack & Associates, P.C.).

Presently, Judge Haddad is Chair of the Board of Visitors at Northern Illinois University College of Law. He is also an adjunct professor in trial advocacy and mediation at The John Marshall School of Law. Judge Haddad has lectured and published articles on trial practice for the Illinois State Bar Journal, the Chicago Daily Law Bulletin, the Illinois Trial Lawyers Association, and the American Bar Association and numerous other organizations.

Judge Haddad is a graduate of St. Ignatius High School, Marquette University, and DePaul Law School. He is married to Sandra, a pre-school/CCD teacher. His son, William, Jr. is a computer programmer. His daughter, Christina, is lawyer with the Illinois Attorney General. And, his son-in-law, Joshua, is an attorney with the Legislative Research Unit of the Illinois General Assembly.